Halloween: The Samhain Festival – with Luna 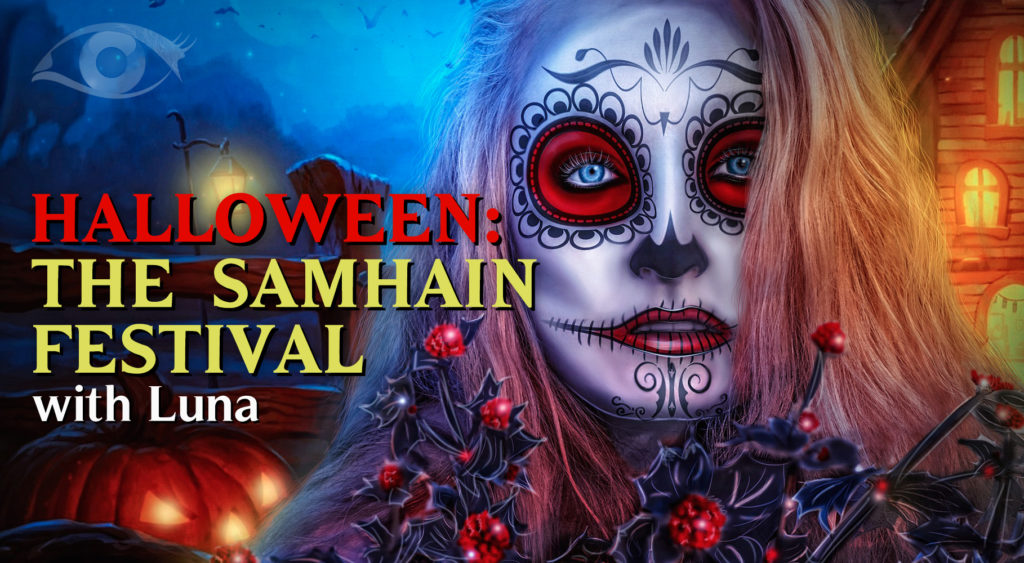 October 31st marks the day that we now know as Halloween. It’s a fun, spooky time where we can enjoy quite a few things steeped in tradition: without even realizing. Our exploration begins with the Celtic festival, Samhain. Samhain, pronounced ‘sah-win’ is a festival from the ancient Celtic spiritual tradition to mark the end of the harvest season, the end of summer and to honour ancestors with prayers and feasts. Celebrated each year on 31st October Samhain marks the New Year for witches.
This year Samhain is on a Full Moon and a Blue Moon making it an ideal time to banish negative energy, behaviours and begin your clearing work. Blue moons are extremely rare and occur when two full moons occur in the same calendar month. This year Samhain is an extremely powerful time to work on your ‘magick’ (as the witches would pronounce it!).

Another tradition associated with this is something called the Dumb Supper. Traditionally food, in particular, root vegetables like apples and turnips are harvested in abundance. We can honour our ancestors by having a ‘Dumb Supper’, which means setting a place at the table and allowing your relative to celebrate with you one last time. Providing an offering for your ancestors on your alter can include crystals like smoky quartz, black tourmaline, obsidian and onyx. You can include photographs and belongings to love ones. Historically a bonfire is held, Celtic priest and priestesses would work their magick around tremendous fires.

The Day of the Dead

Otherwise known under its original name ‘Día de los Muertos’. This is a vibrant and colourful celebration in Mexico celebrated over two days around 31st October. I have been fortunate to be in Mexico City twice during this celebration, it is a vibrant explosion of colour all over the streets. In towns and cities throughout Mexico, revellers wear funky makeup and costumes, hold parades and parties, sing and dance, and make offerings to lost loved ones.
The dead are still considered members of the community, kept alive in memory and spirit—and during Día de los Muertos, they temporarily returned to Earth. The centrepiece of the celebration is an altar, they welcome spirits back to the realm of the living. Alters have offerings—water to quench the thirst after the long journey, food, family photos, and a candle for each dead relative. Marigolds are the main flowers used to decorate the altar. Scattered from altar to gravesite, marigold petals guide wandering souls back to their place of rest. All Saints and All Souls Day

Sometime around the 8th century, November 1st was set aside by Pope Gregory III as All Saints Day. This was intended to honour the dead who have passed over and gone to heaven. All Souls Day, on November 2nd, is for those who have passed but have not yet made it there. Many of the Halloween traditions and the traditions for All Saints Day have their roots in Samhain.
For those people, this was when time didn’t have any meaning. The lines between the present, the past, and the future became one. This was when the dead would come to visit among the living and demons, fairies, witches and other supernatural entities walked freely.

During the early All Souls’ Day parades in England, families would bake soul cakes- to hand out to the poor. The recipients of the cakes would then pray for the dead of those families. In time, children started to go from door to door, and receive various treats. Ale, money, baked goods and other food items were common.
Getting into costume for the event came earlier on. In the days when this began, late autumn and winter were sparse times for many people. Throw in the fact that the days were much shorter and it became darker, sooner: and wintertime was a very scary time for many. Because of the belief that the dead were roaming around, many people became afraid to leave their homes – so, in order to avoid detection: they wore masks. One of the most common rituals was to help young women find their matches. One ritual involved taking all of the single men and women within the village- and blindfolding them. They would then be taken into the garden area to dig for kale. Divination by way of the kale stalks would reveal information about who they were going to marry.
Another tradition involved naming hazelnuts and throwing them into a fire. How the hazelnut burned would then give the name and other information about a future spouse. Women who were eligible would also gather up bunches of apple peels- to be thrown over her shoulder. She would then look at the way they landed to decipher the initials of her soon to be husband.

Welcome to my website, my name is Luna Lights. I am a qualified INLPTA neuro linguistic programming practitioner (NLP). I offer spiritual life coaching through Luna’s lessons and courses. As an intuitive psychic I offer psychic readings through Psychic Today on Sky channel 680.